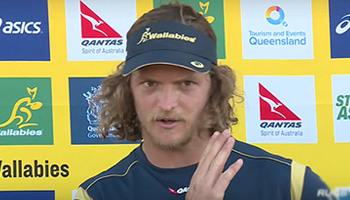 Nick Cummins has made a surprise return to the Wallabies squad, after having initially been overlooked. Henry Speights compassionate leave, following the passing of his grandfather, has meant that Cummins has got another shot at that much sought after Rugby World Cup place.

Speight will remain out of the Wallabies squad until they return from Mendoza, Argentina.

Cummins is now training with the squad ahead of the Rugby Championship opener against the Springboks on 18 July at Suncorp Stadium. He is up against the likes of Joe Tomane, Rob Horne, Drew Mitchell and Taqele Naiyavoro on the wing, but is determined to have a crack at it.

On the return of Mitchell and Matt Giteau, both from Toulon, Cummins says they’ve brought with them some new cultural greetings, but he has nothing but respect.

“You see Gits out there, he’s still got it. Back in the day six, seven years ago I was playing with him at the Force and he still has that same zing. Credit to him, I don’t know how he does it. He’s going to be dangerous.”