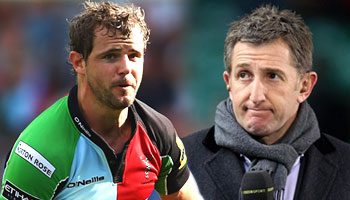 As this year comes to a close we look towards 2013, which is set to be one of the most significant chapters yet in the history of the British & Irish Lions, as they take on the Wallabies in search of their first series win since 1997.

Over the course of the next six months the Lions XV will be one of the most talked about and closely scrutinised selections in world rugby. With that in mind, today we look at two recent HSBC Ambassador videos that feature Nick Evans and Jonathan Davies making their picks.

Harlequins and former New Zealand flyhalf Nick Evans chose his starting XV for the first Test a few weeks back, and also made a prediction for the series result. He’s gone with a few ‘Quins team mates, but has omitted his club captain.

Nick Evans’ Lions starting XV to face The Wallabies in 2013:

Former dual-code Wales International and commentator Jonathan Davies has also selected his starting XV for the first Test of the British & Irish Lions Tour to Australia.

With years of experience in both codes of the game, and now a seasoned pundit, Davies has included six Welsh players and six Irish players in his lineup. Among other selections, he’s moved Brian O’Driscoll to inside center, with namesake Jonathan Davies in at 13.

Jonathan Davies’ Lions starting XV to face The Wallabies in 2013:

You no doubt have your own opinion on the above selections, so would you tweak their choices slightly, keep as is, or change things up completely?