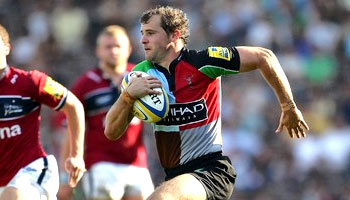 Harlequins flyhalf Nick Evans has been voted as the Aviva Premiership Rugby Player of the Month for September. He was chosen as a stand-out performer by a panel of rugby media, including writers, broadcasters, and photographers.

“The Quins have made a sensational start to the season and Nick has shown exactly why he should be 12,000 miles away in New Zealand as part of the All Blacks World Cup squad. But New Zealand’s loss is Harlequins gain as Nick continues to demonstrate why he is one of the best foreign players ever to take the field in the Aviva Premiership,” said Rugby World editor Paul Morgan.

Evans, now 31, spoke of the pride he felt in picking up the award.

“I am lucky to be in a team that allows me to play the way I want to. We enjoy playing together and the results so far have reflected that. The support off the pitch from the coaches and Quins fans is great and I am looking for a great season in the Aviva Premiership,” he said.

A fantastic talent that in another era might have been an All Black great. Would you have him in New Zealand right now, especially as the All Blacks are down to their third choice number ten?