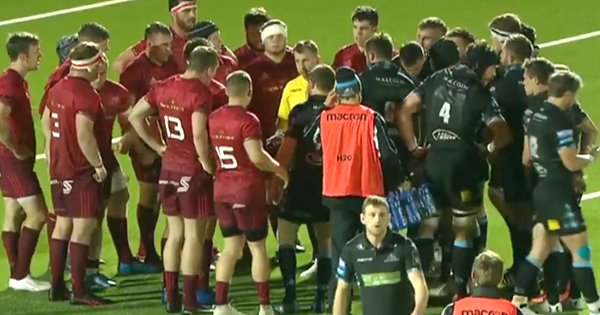 Referee Nigel Owens was the center of attention yet again this past weekend, as he brought all the Munster and Glasgow Warriors players in for a telling off. It’s not the first time we’ve seen him do that, as you’ll remember way back in 2010 he did the same thing with Leinster and Scarlets.

On this occassion he did so because tempers flared and he wanted to calm things down.

“That is totally unacceptable, is that clear?” the Welsh referee said.

It’s classic Owens, controlling the situation, but causing amusement at the same time.

While he is arguably the best referee in the world, what did you think of this?

Nigel Owens warns all thirty players, as only Nigel Owens can do | RugbyDump - Rugby News & Videos