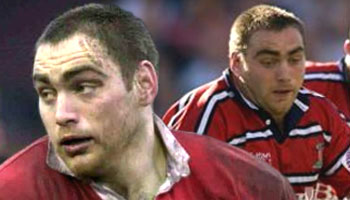 For a while now I’ve been trying to track down the best tries scored by forwards of the chubbier sort – Props. We’ve managed to get hold of quite a few, but in all honesty, this one for me takes the cake… so to speak.

Trevor Woodman MBE, the World Cup winner who lifted the trophy with England four years ago, played his rugby at Gloucester for nine years before moving up north to Sale. He unfortunately had to retire prematurely due to a nagging back injury sustained in training.

Woodman achieved great things in his career though, with the World Cup win in 2003 being the main highlight obviously. But when Gloucester played the Saints only a few months later, Woodman set the game alight by scoring an amazing solo effort.

With the score tied at 17-17, the ball was swung to the out of position Woodman who, with all the confidence in the world, attacked the line as though he were a centre of international quality.

The rest is history.

Stuart Barnes, ex international player and now commentator, chose it as the Try of the Week.

“One stride short of 40 metres from the Northampton line, the front rower eyed the gap – a gap that didn’t exist until two abrupt hand-offs had despatched the Saints hooker and fly-half unceremoniously to the Gloucester dirt.

“I swear there was a hint of a sidestep to unbalance the full-back before a third resounding fend left Beal eating grass and the Shed doing cartwheels. It was some score.”

Amazing try and possibly the most incredible try by a prop forward that we have on here.