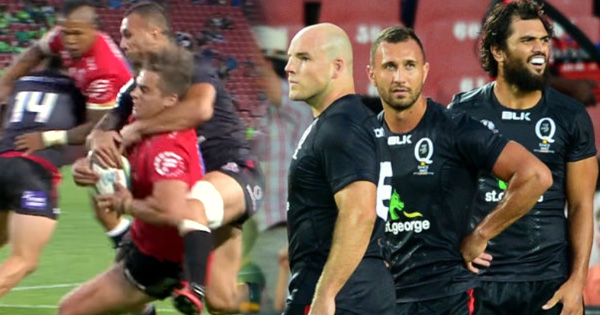 The Queensland Reds were given a severe 44-14 hiding at the hands of last year’s Super Rugby finalists the Lions in Johannesburg on Saturday. They were not aided by the loss of playmaker Quade Cooper, who saw red for this challenge early in the second half.

After leading 15-0 at the break, the Lions picked up the pace in the second half and as star center Rohan Janse van Rensburg went over for the try, Cooper caught him too high in the tackle.

It was an interesting few minutes as the Reds were already down to fourteen men after Eto Nabuli was sinbinned for cynical play. The officials had two incidents to look at, as there appeared to be a tip-tackle taking place on Elton Jantjies in the background too.

That one was ignored, probably due to lack of evidence (camera angles), but as Cooper was told, referees have few options these days and the directives on high tackles are very clear.

ALL SUPER RUGBY ROUND 4 HIGHLIGHTS

Following initial consideration by the SANZAAR Foul Play Review Committee, Cooper will appear at a SANZAAR Judicial Committee Hearing after having contravened Law 10.4(e) Dangerous tackling of an Opponent.

The Judicial Committee for the Hearing will be Terry Willis (Chairman), De Wet Barry and Mike Mika which will be held by video conference at time to be determined following consultation between the Reds and SANZAAR.

Cooper will likely be out of action for one or two weeks, so has flown back to Australia and coach Nick Stiles has confirmed that young Jake McIntyre will fill in at flyhalf for their next clash, against the Jaguares in Buenos Aires.

UPDATE: Cooper has been suspended for 3 weeks

“With respect to sanction the Judicial Committee deemed the act of foul play merited a mid range entry point of 6 weeks. However, taking into account mitigating factors including the Player’s admission of guilt, his remorse and the fact that the Player had a good disciplinary record having not come under notice since 2012, the Judicial Committee reduced the suspension to 3 weeks.”

Coaches from both sides commented on the red, saying that the directives are clear and as long as referees are consistent, there should be no complaints.