Quade Cooper returns after seven months off through injury 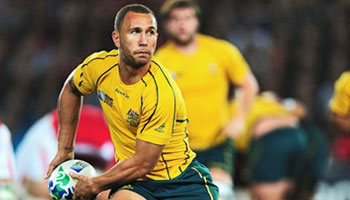 Quade Cooper made his long-awaited return to rugby on the weekend after being out of the game since injuring his knee seven months ago in the Rugby World Cup match against Wales. He spoke to Fox Sports about coming back, rehabilitation, and Richie.

By Cooper’s standards, his performances for the Wallabies at the world cup were well below par. Going into the tournament they were serious contenders, but struggled at times, with the gifted number ten’s form partly to blame.

He got a rough ride from the Kiwi crowds, mainly due to his apparent feud with Richie McCaw, which many believed didn’t help is game, but he says that the bad form wasn’t due to that. He also doesnt regret anything that happened, dating back to Hong Kong.

“If I was to take any kind of backward step to Richie or anyone else on the field, then what sort of example is that setting for the rest of my teammates”, Cooper explained.

He’s been working hard for the last seven months, doing the training and gym work to get his ACL fixed up, and Reds captain James Horwill believes he will come back stronger.

“Quade certainly worked hard in the off-season while he was injured. I think the boys really enjoy having him around at training – not only the freakish ability he’s got but he’s very good at organising the boys around him,” Horwill said.

“And I think that’s something we may have missed earlier in the year – his talk on the field is very good and he organises the play very well and he directs traffic.”

Fox Sports’ Nick McArdle spoke with Cooper ahead of his comeback game, touching on subjects that have got people talking in the past, and some that you may not have known about.

View highlights of his return game, the Reds vs the Lions, here