Quade Cooper sinbinned for off the ball shoulder on Nicolas Sanchez 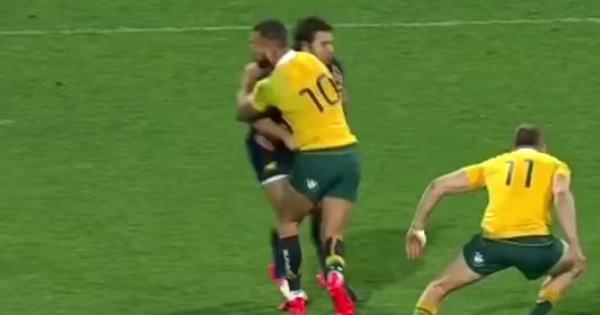 Mercurial Australian flyhalf Quade Cooper was yellow-carded in Saturday’s clash against Argentina, as it was deemed his shoulder charge on Nicolas Sanchez was illegal, with neither arms nor ball in the tackle.

It looked as if Sanchez was preparing to recieve a pass when prop Enrique Pieretto stepped in front and took it himself. Cooper likely also expected Sanchez to recieve the pass so followed through with the hit, albeit in an illegal and potentially dangerous way.

Referee Wayne Barnes gave a yellow card for no arms and no ball in the tackle. Also, credit Nigel Owens for being well-positioned to initially see the hit.

On the other side of things, Sanchez has a bit of a reputation for play-acting, regularly going to ground as if he’s been snipered from the crowd, so it quite likely made the hit look even worse.

In fact it’s not the first incident that he has had with the Wallabies. In July, 2015, Michael Hooper was found guilty of punching him and suspended for one game as a result.

Over the last few matches, playmaker Cooper has actually enjoyed a return to form. He was included in Fox Sports Lab’s Rugby Championship team of the week at flyhalf and he credits his stint at Toulon for giving him a “reference point” to become a better all-around player.

Do you think the yellow card was harsh, spot on, or should it have possibly been red?