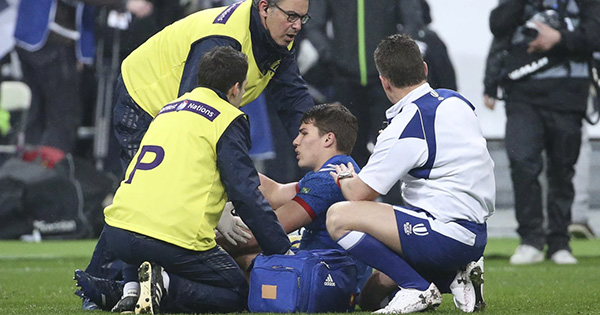 One of the biggest talking points to emerge from Ireland’s thrilling, extra-time victory on Saturday has been France’s questionable use of HIA tactics. The confusion around what happened has gone through one review already, and now reaches the second stage.

Flyhalf Matthieu Jalibert suffered a knee injury in a first-half collision with Bundee Aki. Nonetheless, a Head Injury Assessment was ordered. Later on, replacement half back Antoine Dupont went down in the 76th minute with what was also clearly a knee injury.

Surprisingly, yet another HIA was ordered.

Referee Nigel Owens had no choice but to defer to the official match doctor.

Of the two, Dupont’s was obviously the more significant as it allowed France to bring scrum half Maxime Machenaud back into the game, instead of another player. Machenaud, however, was never asked to kick again. And as we know, Ireland won the match in dramatic fashion.

As many have pointed out, questionable Head Injury Assessments have been used before by the French, in particular against Wales during last year’s competition.

Jalibert and Dupont were indeed both injured and Dupont will miss the remainder of the tournament, while Jalibert will be out for at least a month with a partially torn ligament.

“Following the NatWest 6 Nations match between France and Ireland on Saturday, the independent Head Injury Assessment (HIA) Review Processor appointed by Six Nations, Alligin (UK) Limited, carried out its review of various incidents from the match.

“That initial review has now been concluded and, in light of the views expressed by the Review Processor, Six Nations Rugby has referred two such incidents to the HIA Review Panel, ie the second stage of World Rugby’s HIA review process.

“The HIA Review Panel, which is chaired by Roger Morris (Wales), will consider the incidents and report to Six Nations. It can make recommendations (among other things) as to further education and training that is required, and/or whether disciplinary action should be taken by Six Nations.

“It is anticipated that, due to the need to consider various materials and contact a number of individuals, the HIA Review Panel is unlikely to finalise its report for a number of days. No further comments will be made until the conclusion of the review process.”

For his part, French head coach Jacques Brunel stated that France had no control over what the doctor decided to do. “They were collisions, but the head injury protocol was decided by the independent doctor. It wasn’t our decision.”

Brian O’Driscoll is among those who aren’t buying it.

Here he is on Off The Ball explaining his feelings.

Credit: Off The Ball/Jean Catuffe/Getty Images