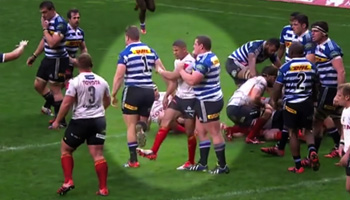 Here is an interesting clip from Superport’s coverage of the Currie Cup in South Africa, and the game between the Cheetahs and Western Province. Rayno Benjamin attempted to kick/trip a player, but got spotted and was cautioned, which apparently means a yellow card.

Most of us probably would have thought that the TMO in this case was referring to a warning, but the referee had little doubt and sent Benjamin to the sinbin straight away.

He then absolutely bombed a try with the tryline in touching distance, and complained about it. It was certainly a rough afternoon out for the Springbok Sevens flyer, as explained by Supersport commentator and analyst, Kaunda Ntunja.