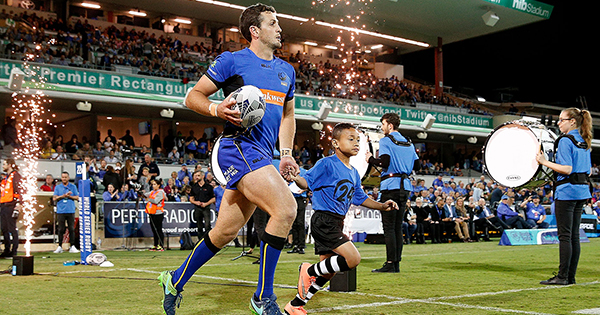 The Western Force kicked off the all-new World Series Rugby with a 24-14 win over Fiji Warriors on Friday, launching the new initiative that gives them a lifeline after they were dumped out of Super Rugby last year. The tournament, driven forward by Billionaire Andrew Forrest, features plenty of razzle-dazzle and some interesting law changes.

A series of law changes are in place to speed up the game and make it more exciting for fans.

Seven point tries (called a “Power Try”) are awarded for tries that begin inside the team’s defensive 22m area, if there is no break in continuity of possession, ie: the attacking team can’t commit a penalty or turn the ball over.

None of these took place on Friday but it was an entertaining game with plenty of fanfare, including an impassioned speech from Forrest.

“Last year was a great injustice, and one that we want to right,” Forrest said. “You are the reason I did this. Your presence here will help this. “I’m relying on you – mums and dads, boys and girls – to back the Western Force – not for a game, not for a season, but for a generation.”

In other law changes, lineouts can be taken as fast as they want, even if the opposition are not ready, and there are rolling substitutes, with coaches allowed to make up to 12 changes.

There is also a one minute limit on scrums.

The Force will next face Tonga on Sunday but are also due to play against invitational sides from Samoa, Hong Kong, Australia and New Zealand.