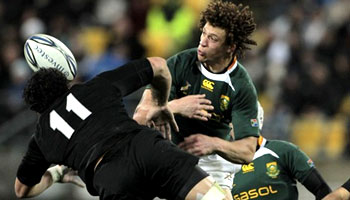 The Tri Nations continues to fascinate as this past weekend we saw another match end in a great win for the dominant All Blacks. There were many talking points which once again put the spotlight on the officials. Here are two clips that you might like to watch, and discuss, again.

In the first clip, as shown during the highlights package on Saturday, you can see the big hit by debutant Rene Ranger on Springbok Zane Kirchner that rocked him back while he was tackled low by Conrad Smith.

One of the reasons for posting the hit again is that on this one you can hear it from the New Zealand commentators perspective, who seem to have mixed opinions on the legality of it, but then seem to agree in the end that it was perfectly legal. On the South African feed, Bob Skinstand was outraged. Perhaps it just depends on which side of the fence you’re sitting?

Later in the match, Kirchner got his own back as Cory Jane cut inside and got smashed with a forearm square on the chin. The tackle wasn’t spotted by any of the officials, and Kirchner wasn’t cited. Jane did lower himself slightly, so maybe that’s why Kirchner got away with it, but there seems to be a few things being missed out there, as well as strangely dealt with at times.

Feel free to share you opinion, but this post is mainly just to show the incidents as some had requested seeing them again. I’m myself am still undecided about the Ranger hit, so might need some convincing either way.