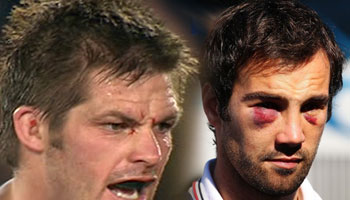 In the aftermath of the All Blacks victory over France in the Rugby World Cup final there have been many different theories and allegations, some within reason, others perhaps not. Today we attempt to provide more clarity on all the incidents.

One thing that’s clear is that everyone has an opinion. If you’re French, you’re more than likely going to be quite vocal at this time, but that’s understandable – your team lost and you’re unhappy. We sympathise with you. Everyone goes through it from time to time. Just ask Wales.

For the neutrals, some of what has gone on has left this RWC with quite a quite sour aftertaste. The tournament that has been litterered with controversy, and be handled badly at times. Here’s a look at three of the incidents from the final though, and a few thoughts on each.

There have been numerous site comments, emails, tweets, etc all saying that this penalty kick from Stephen Donald actually missed. It didn’t.

Having studied it in good quality, slowed it down, and having used a bit of common sense, you can clearly see that the camera is moving from left to right, creating an illusion of it having slipped wide and to the right of the post.

The ball ends up on that side because he’s kicked it in the form of an in-ducker, which is basically when the ball goes from left to right from a right-footed kicker after he’s stabbed at it. It’s almost like a slice, or the same direction you’d expect a slice to go anyway.

That’s certainly not conclusive proof, but just look at the reactions of the touch judges (flags up straight away), the crowd, the French players, and Donald himself. It might have looked like it missed when watching on tv, but there’s no conspiracy here. Hopefully we can put this one to rest.

Early on in the game French number ten Parra took a bad knock to the head from All Blacks skipper Richie McCaw as he attempted to clear out Thierry Dusautoir. Parra had to leave the field. He returned but didn’t last long, and left again.

You can see in the above picture that the knock was a fairly hefty one, and the video replay showed that McCaw’s knee (and hand, depending on how you want to view it) made contact with his cheek. It’s also possible that part of the knock came from the initial burst by Ma’a Nonu.

Was there anything intentional there from McCaw? This is another one for you to decide on, depending which side of the fence you sit. As a neutral, you would think no, it was not intentional. While the super-slowmo shows us a knee hitting a face, every other angle indicates that he was doing what every loose forward does in every game of rugby on the planet – attempting to clear out a player and compete for the ball.

If anything it was clumsy, as his eyes were on Dusautoir the whole time, but perhaps at a stretch one could say that he could have been more aware of Parra on the floor.

During the game it was clear to see that something had happened to McCaw on the floor. His reaction to the ref, and the redness in the eye, and eye area, showed that something must have taken place. TV show Reunion in New Zealand have now released a video of it, following strong allegations by commentator Keith Quinn.

A source within the New Zealand camp confirmed it, but the video wasn’t clear, which is why Reunion have released the below footage. You can decide for yourself what takes place.

The citing period for the match has passed, so it’s possible that Rougerie may not face any punishment. The IRB usually take quite a strong standpoint on such offences though, so we’ll need to wait and see what happens. McCaw himself hasn’t complained formerly, but did say that he felt something around his eye but didn’t know what it was. He also said he wasn’t sure if it was intentional or not.

Other controversies
The refereeing of Craig Joubert had been praised for most of the tournament, but in the final game the 50/50 calls seemed to go New Zealand’s way, particularly in the first half. Was there an agenda? One would like to think not, but stranger things have happened at this tournament. There is a video doing the rounds that includes two pundits from an Ireland television station analysing the breakdown. You can view that here and make your own mind up.

One thing is certain, Joubert is not a popular man in France right now.

Haka fine for France
As you will have heard by now, France have reportedly been fined for part of their response to the Haka just before kick off. The fine, reportedly amounting to £2500, is not actually for responding, but is specifically because they crossed the halfway line, which is against the regulations and agreements in place for ‘cultural challenges.’

This crazy thing is that technically some of the New Zealand players also crossed their ‘border’, as you can see at the end of the France challenge the Haka video that was posted here earlier in the week. We are however yet to see official written confirmation of the fine.

Impartiality
Lastly, accusations of bias and a lack of impartiality on Rugbydump are completely unfounded, and to be totally honest, fairly narrow minded and insulting. If you’ve visited the site for the past five years you will know the site’s intentions.

Nothing has suddenly changed, and why would it? Please take a moment to think things through before posting unwarranted abuse. Here’s looking forward to the rest of the season. Cheers.