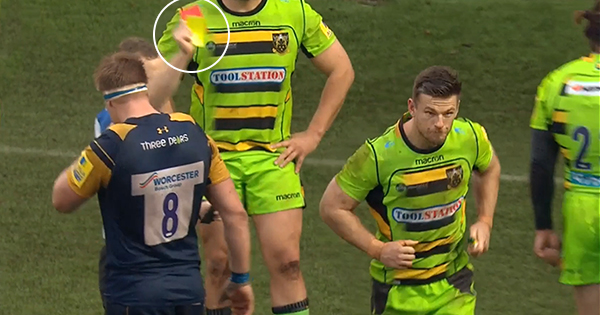 Former Wallaby back Rob Horne was last night banned for a week after two dangerous tackles in the same match. There was an offence in each half, with the second challenge coming in the final seconds of Northampton Saints’ loss to Worcester Warriors on Saturday.

Horne, capped 34 times by Australia, joined Saints at the beginning of the season but will be hoping to forget about this game as soon as possible, as it was both a 30-15 loss and a nightmare ending for the centre.

He picked up his first card for a high challenge on Chris Pennell in the first half, then on full time lifted and tipped fellow Australian back, Jono Lance.

Lance, incidentally, has just signed with the Melbourne Rebels for Super Rugby 2018.

Horne got his second yellow card with time up, as the referee and TMO deliberated on whether or not to award a try to would be hat-trick hero Bryce Heem.

The try was awarded, as was the yellow and red card, despite fullback Ben Foden’s best efforts to get the referee to yellow card him instead.

Under RFU regulations, two yellow cards (where both are for acts of foul play) results in a sanction of one week off from playing. Horne did not contest the ruling.

He is therefore free to play again on 26 November 2017, after missing their fixture at Sale.