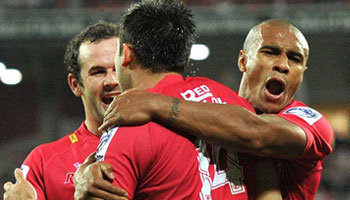 Rocket Rod Davies scored one of the tries of the season on Saturday as the Reds powered past the struggling Sharks to claim a 32-17 bonus point win at home. They now head to South Africa with goals of reaching the top of the Australian conference.

The Reds shot out to a 29-3 halftime lead in Brisbane, blowing the visiting Sharks off the park in what was a frustrating performance for last year’s finalists.

Much is said of turning points, and with the Sharks five meters out and hot on attack just fifteen minutes into the game, turning over possession proved vital.

The Reds spun it wide and before the Sharks knew what hit them, through some great play by Wallabies Digby Ioane and Will Genia, flyer Rod Davies was in for a try at the other end.

“That old notion ‘speed kills’ is very true. That pace is always in the back pocket to use and you get a good footy brain with Rocket (Davies) as well,” Quade Cooper told the Courier Mail.

The Faingaa twins, Saia and Anthony, scored a try each, while Davies scored a brace. He has now scored five tries in the last four matches, putting his hand up for Wallaby contention.

“Guys can honeypot to the breakdown when breaks are made, but Rocket and Anthony, for his try, kept that width right across the field that is so important. The defence then has to spread, you can get through a bit and scoring chances come,” added optimistic Cooper.

The Sharks played better in the second half but weren’t able to pull things back after such a great first period by the home side, who now set sail for South Africa and two tough tour matches.

View extended highlights of the match

Extended Highlights of the Reds vs the Sharks from Brisbane