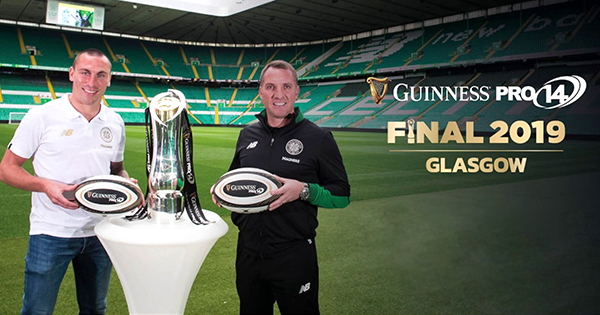 Glasgow’s Celtic Park will host the 2019 Guinness PRO14 Final on May 25 as the Championship takes another historic step with the showpiece event being held outside of a traditional rugby venue for the very first time.

Fresh from the success of the 2018 Guinness PRO14 Final in Dublin that saw a new record attendance set for the third year in a row, Glasgow will play host as the Championship decider returns to Scotland for the first time since 2016.

With a capacity of 60,832 Celtic Park is known for football, but also hosted athletics and cycling when the site opened in 1892 and today holds a reputation for providing some of the most colourful and passionate atmospheres in all of sport.

Martin Anayi, CEO of PRO14 Rugby, said: “Bringing our Final to a world-famous stadium like Celtic Park is a truly historic step in the evolution of the Guinness PRO14.

“Since introducing Destination Final venues in 2015 we have seen the event thrive by making it about fans of rugby and not just the supporters of the two teams competing for the trophy.”

By visiting https://www.pro14rugby.org/register2019 fans will be able to pick out the best seats in one of sport’s most iconic venues while also accessing great offers for adults and families alike.