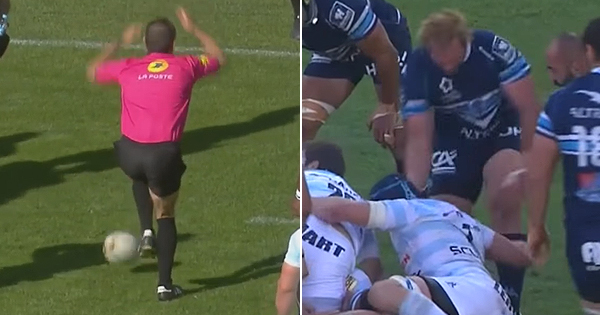 Last weekend’s Top 14 play-off between Racing 92 and Montpellier was a cracker that went right down to the wire, with Racing eventually coming out on top 22-13 in the south of France.

While the intensity was ramped up throughout am incredibly tight second half, there was at least some time for comic relief, when referee Romain Poite copped a blow to his lower regions.

Poite was clearly taken by surprise when the ball was returned to the field and in what was more a painful experience than a humorous one for the Frenchman, it was heartening to see players from both sides show concern.

But as we’ve come to expect from Poite, who has had his fair share of tumbles and incidents in the past, he was quick to put it behind him and continue with the game unfazed.

Racing ultimately proved too strong for Montpellier in the end and benefited from the sending off of Jannie du Plessis – for repeated strikes to the face of a Racing player – to wrap up victory with a final minute penalty from Dan Carrter.

Du Plessis, clearly agitated by Racing back-row Bernard Le Roux holding him in the ruck, struck out three times, landing punches to Le Roux’s head and face. Poite had no option but to send the South African prop off.