Ruan Pienaar great solo try vs the Brumbies in 2005 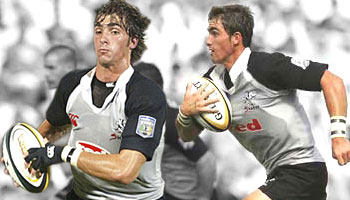 Ruan Piennar will start for the Boks at flyhalf tonight in their World Cup warm up game against Irish side Connacht. The thinking is that during the WC if South Africa have any flyhalf injuries or need a change of tactics, Pienaar is the man who can be backup.

Ideally, he’s a scrumhalf and thats his favourite position. But as Jake White has said, he’s penciled in as backup for 9, 10, 11, 14, and 15. Sometimes a man this talented has trouble cementing his place in a side as a specialist.

For now though at such a young age I’d say he’s happy to be in the fold and willing to give his services wherever they’re needed.

There’s no doubting his versatility either. Some people would say he’s a more devastating runner than number nine allows for so he should be at ten or fifteen. Whatever the case, he’s a highly talented and gifted athlete who can fit in and make an impact from any position.

Against the Brumbies in Durban in 2005 he showed exactly why he’s so highly rated for his running skills. Sublime balance and speed mixed in with a strong rugby heritage passed down on him from his father Gysie, who was a quality Springbok fullback.

Keep a look out for Ruan at this years World Cup. He’s bound to have some sort of influence and make an even bigger name for himself.