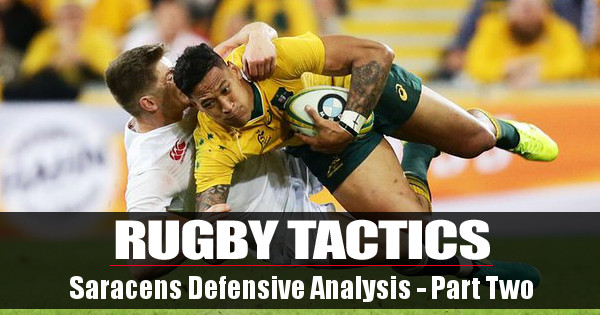 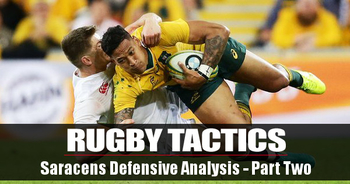 This week, as part of our ongoing collaboration with TheDeadBallArea, we continue our look at Saracens’ highly effective defensive system, focusing on their use of Exit Strategies and how their Wolf Pack defence is now influencing England under Paul Gustard.

Previously we looked at Saracens’ Wolf pack defence and the impact it had on the Premiership final against Exeter. This time we’re going to look at how Saracens use exit strategies to gain territory and turn defensive situations into attack.

We’re also going to look at how the Saracens “Wolf Pack” defence is now influencing England, as Paul Gustard continues his role as England Defence coach.

It’s worth noting how Saracens break from tradition by sending players up out of the defensive line on the kick chase, trusting them to pressurise the kick receiver enough to either make a mistake or allow their team to organise its defensive line as they advance.

Again we see how key decision making is to this, with both Duncan Taylor and Owen Farrell deciding when to break ranks and shoot out of the line. Both weigh up the risk against the reward and choose which offers the greater return.

When looking at England it’s interesting to note that players like James Haskell, whose club Wasps use a similar blitz defence system, have had no problem adapting to the new structure in the England set up whereas players like Luther Burrell, who usually plays under a drift defence system, struggled to adapt.

This shows us that the concept of the blitz defence is simple, yet training oneself to make those decisions under pressure and building that trust within the team can be incredibly difficult.

As always we hope you enjoy the videos and we’d love to hear what you think of them in the comments below. Alternatively if there is something in a game you’ve spotted you’d like us to break down let us know.