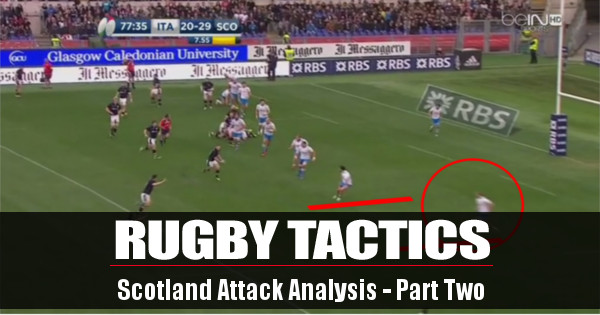 In our last article we looked at Scotland’s exciting attacking play against Wales and how they stretched the Welsh defence by using quick ruck focused attack patterns until they were able to break them down, creating a scoring opportunity.

In part two we’re going to look at their attacking play in their win against Italy in Rome.

This time we see a slightly lower phase attack pattern that moves the Italian defence across the pitch in one or two phases, with Russell using wider passes to stretch the defence before Scotland rewind, utilising the space they’ve created by dragging the defence from touchline to touchline.

This time both scores come from turnovers that surrender possesion to the Scot’s in prime attacking position. It’s then a case of Scotland transitioning into attack mode, identifying the space and then making that space in the defensive line move to a position where they can exploit it.

Something that’s quite interesting is how even though Scotland don’t necessarily create overlaps, their system creates a thin defence that allows their talented back divison the space to break the line, as seen with Stuart Hogg’s class above.

It’s exciting Rugby and further illustrates why we think they are one of the most enjoyable teams to watch right now. They host France this coming weekend at Murrayfield.