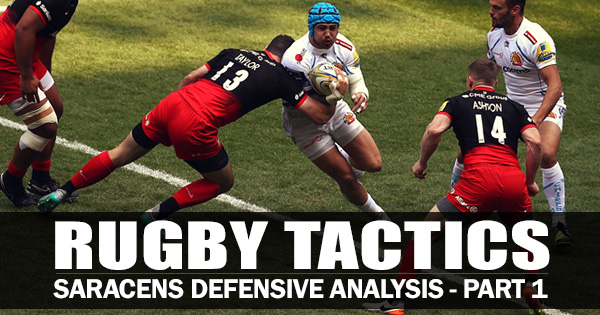 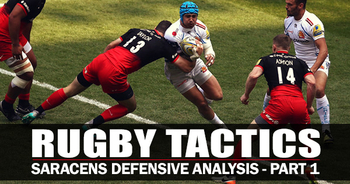 It’s been an outstanding season for Saracens. Winning the European Champions Cup and the Aviva Premiership makes them the first English club to do the double in 12 years. This week, as part of our Rugby Tactics Series, we take look at their highly effective defensive system and how the players within it make it function so well.

Undefeated in the first half of the season in all competitions, Saracens dropped a total of 4 games all season. Staggeringly that’s as many games as relegated London Irish won.

A major component in everything they have done is their highly effective and sometimes brutal “Wolf Pack” defensive system. We see it and admire it every week and with Paul Gustard now coaching England we’re starting to see many of it’s elements migrate to the international side.

As part of Rugbydump’s coaching series we’re going to look at a slightly less focused on, but highly important side, to the system in the decision making and situational awareness that goes into it.

Saracens’ defensive system in itself is pretty simple and relies on a few small but key components to function so well. Aggressive line speed, excellent decision making by it’s players (who are given free licence to break the line and close off the attack knowing that the rest of the defensive line will be right behind them) and adaptability (sometimes they drift, sometimes they blitz).

The point is, as we see, everyone buys in and follows through.

Perhaps unfairly Saracens are often labelled as a defence focused, boring one dimensional side. When people discuss them the focus is usually on their defensive structure.

That’s understandable because as we all know good teams have good defence, something that is as true at the top of the professional game as it is the down the ranks in rugby clubs the world over.

As always we hope you enjoy the videos and we’d love to hear what you think of them in the comments below. Alternatively if there is something in a game you’ve spotted you’d like us to break down, let us know.