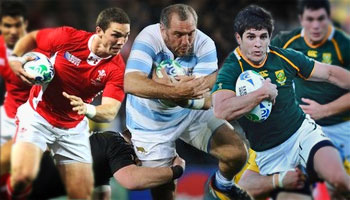 Rugby World Cup 2011 finished just over a week ago, so since then a few different sectors of the media have been stringing together their respective Teams of the Tournament. Here’s a few to mull over, as well as a surprisingly balanced one from Reunion in New Zealand.

Today we take a look at who impressed the most at the tournament, and how selections vary across the board for a RWC 2011 dream team. We also welcome your selections, as it’s always a hotly debated topic among fans.

The main video here is from the Reunion show in New Zealand. They have a nicely balanced team that quite refreshingly features players from a number of different countries. It would have been tempting for them to shove in a whole load of All Blacks, but as you’ll see, they only have five.

Below are another three teams from three different sources. There’s a few common trends, namely with Lionel Nallet, Jerome Kaino, and Israel Dagg all being picked. There’s also a few positional switches, and allowance for injured players in some cases.

Have a look through these, as well as the Reunion selection, and let us know what you think.

Note: Credit to Reunion for the video