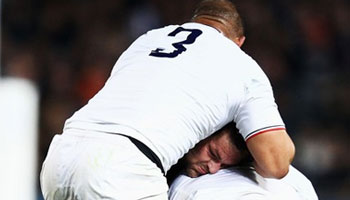 After another weekend of controversy, the referee for the World Cup final between New Zealand and France has been named as South African Craig Joubert. In other news, France will wear white in the final, so New Zealand can wear their traditional black.

In 2007 France famously beat New Zealand in Cardiff with the All Blacks forced to wear their alternate grey strip that clearly didn’t work out too well for them. This year France won the coin toss to determine the home side, but allowed New Zealand to have the choice of wearing their famous black kit.

“We decided to allow the All Blacks the choice to play in black. For us it is a sign of respect and a way for our team to thank New Zealanders for a remarkable World Cup,” said French team manager Jo Maso.

“It is an honour to play the All Blacks when they play in their black jerseys and it is logical with the World Cup final being held at Eden Park,” he added.

The gesture seemed a little lost of Graham Henry though. “We’re the All Blacks, we’re playing at home and we wear black, so it’s an obvious one. But I do thank him,” he said.

The other big news of the day is that France are now ranked third in the world, having moved into that position following their win over Wales on the weekend. Wales drop to sixth but can make up ground with a third place play off win. Australia remain second despite their loss to New Zealand, while South Africa move out of the top three for the first time in a while.

Craig Joubert will take charge of the final after having had a solid tournament with the whistle. In today’s RWC Daily there’s a bit of a chat with him, some random cooking classes, and New Zealand coach Henry talks about preparing for the World Cup Final.