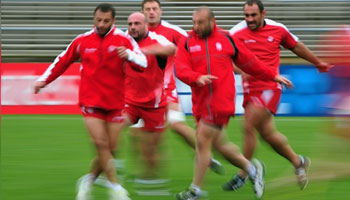 After a few days break, we’re heading into the next round of the World Cup, as three games take place in New Zealand tomorrow. The latest Rugby World Cup Daily show catches up with some of the teams, and previews the games.

As yet there have been no major upsets, but the so called minnows have all performed well, proving that great progress is being made in those countries. As if often the case, when they’re able to get their best players together and find some continuity as a squad, they’re able to put up a good fight.

Japan, Namibia, Romania, and the USA have all put in strong first half performances and in some cases, really tested the opposition. Neutrals will be hoping to see more of the same tomorrow as Namibia, Canada, and Georgia take to the park. For the latter two, it’s their first game of the tournament.

Samoa play Namibia in what you’d think will be a brutally physical contest, but you’d pick the Samoans to come out on top with their experience and strike power out wide. Tonga against Canada will be an interesting one, but the same applies, and the Tongan might should be too much for Canada’s fight. Once again, massive physical contest, and those Cannucks won’t back down.

In fact all three games come in similar moulds, as Georgia will throw themselves about the park against Scotland too, so that game will be worth watching. You’d Scotland won’t have too much trouble with them, although stranger things have happened. Remember Ireland in 2007?

In today’s RWC Daily show a lot of emphasis us put on the smaller nations, with some interesting insight from the Namibian camp. Now is as good a time as ever to share this great infographic with you, created by the talented guys at Ruggerblogger, using IRB Stats as reference.

As explained on their website, the large circle for each nation is the Total Number of Registered Rugby Players (TRP) in that country, men, women, boys and girls. Each large circle has a smaller circle inside it, in proportion, and that represents how many of those players are Senior Males (SM).

Have a look  at the graphic above and video below, and feel free to share your thoughts as a comment about either, both, or your predictions for the next round of matches. If you haven’t registered an account on here yet (for quickfire commenting and a profile), you can do so now quickly on the Register page.