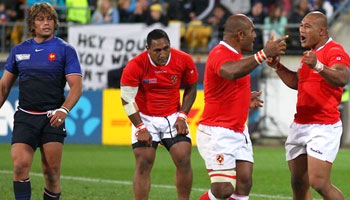 Another great day at the Rugby World Cup ended with a heartbreaking loss for Scotland as they conceded a late try to England, to not only fail to go through to the next round, but also lose the game. Elsewhere Tonga were triumphant though, as they upset France.

In the first game of the day Australia beat Russia 68-22 after a one sided rout in the first half that saw the Wallabies score forty points. In the second the Russians came back strong and managed to get on the scoreboard with some spirited play. Unfortunately for Australia, the injury list increased as Drew Mitchell pulled up with a hamstring problem.

Tonga beat France 19-14 in their final RWC game. The French will face England in the quarter finals next week but have many issues to deal with before then, namely their halfback combinations, and their scrum.

In a fiercely ugly yet thoroughly enjoyable game of rugby, England beat Scotland 16-12 following a late Chris Asthon try that denied the brave Scots the win. They’d needed to get a victory by eight points or more to ensure their qualification, and were on track for a large part of the game until Jonny Wilkinson found his feet, and Scotland failed to score tries. They will head home if Georgia don’t thrash Argentina tomorrow morning.

In other news, it looks as though Dan Carter’s injury at training could rule him out for some time. The severity of the groin strain will be revealed soon, but he will sit out of the Canada game.

In the rest of the RWC Daily show, Ireland’s defensive coach Les Kiss talks about the crucial game with Italy, and Canada’s Kiwi coach Kieran Crowley (say that three times fast), talks about their upcoming game against his country of birth, New Zealand.