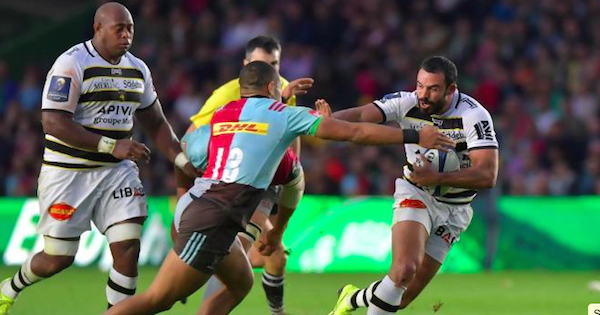 This week Shay looks at the performances by English clubs in the opening round of the European Rugby Champions Cup. It was a poor start for most, with two wins against European teams, none of which were away from home.

This puts English teams at the bottom of three of the five pools after round one.

When compared to Irish teams, who were unbeaten in four matches and the French sides who won six out of seven matches, the Premiership sides look off the pace.

With two of the 15 members in Sky Sports’ team of the week representing Premiership clubs, what are the reasons for the lacklustre start?

Two of the defeats were away from home in some of the most notoriously difficult stadiums to play at in Europe. Wasps had a short turnaround between their previous game and with 15 injuries in the squad, it would have been tough to get a result against Ulster at the Kingspan Stadium.

“We’ve been one of the teams which has had unfortunate things happen,” said Wasps fly half Danny Cipriani. “Someone fell on my leg which is how I got injured, Sam Jones got injured doing judo, unlucky things. It’s frustrating when last year we won all our games early on.”

Stuat Barnes added in his Sky Sports collumn: “A lack of punch up front and variety behind. Elliot Daly looked leaden footed. That sort of sums up Wasps at the moment.”

England wing Jonny May scored his seventh try of the season in Leicester’s narrow defeat away at Racing 92 and the visitors made more metres from fewer carries that the Paris-based side.

This suggests that Tigers have more effective ball carriers than the French side and a losing bonus point against the 2016 Top 14 champions is a respectable outcome.

Harlequins were undone by La Rochelle at the Stoop in a fast-moving game of rugby. Geoffrey Doumayrou caused problems for Quins in the centres; contributing to the visitors’ 11 clean line breaks.

The home side should be worried that they lost the game despite making more than double the number of carries and passes than La Rochelle.

The home side were beaten in nearly every statistic except for carries and the score line. It was a well-executed tactic by Rob Baxter who compensated for the wet conditions perfectly.

Saracens remain odds on favourites to win this years’ tournament and equal Toulon’s three consecutive titles. The London-based side dominated Northampton in every area on Sunday and Sarries missed 12 tackles during the 80 minutes, the fewest of any English club in round one.

Barnes added: “As for Saracens, they were simply sensational. I watched their performance in a state somewhere close to religious awe. What else can be said about the three time European champions?”

WHITEWASHED IN THE BATH – Bath 23 – 0 Bennetton

Bath also put in a very dominant, commanding performance to keep Bennetton off the score sheet. This makes them the first side to nil a team since Glasgow trounced Leicester in January.

Both wingers played key roles in both of Bath’s tries, but the home side were beaten by Bennetton in metres gained, number of carries, defenders beaten, passes and offloads. This highlights the clinical nature of Bath’s posssession and they will be confident going to play the Scarlets in round two.

Winning home games is the most important thing to do in the pool stages of the competition and if each team collects losing bonus points in away matches, possibly snatching one victory, then qualification for the knockout stage is almost guaranteed.

So despite statistics suggesting a poor start, there is no need for English fans to panic.