RUGBYDUMP WEEKLY: Michael Cheika proving to be the real deal? 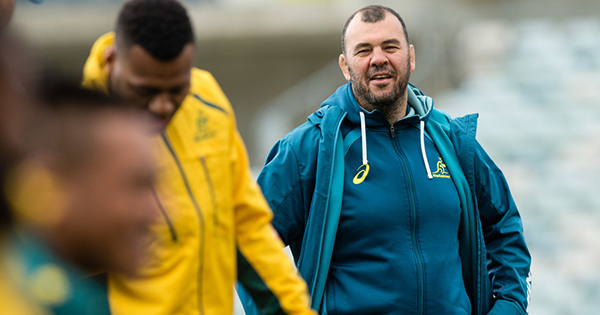 Following the Wallabies’ impressive 23-18 win over the All Blacks in Brisbane at the weekend, Shay Waterworth looks at the progress of Michael Cheika after three years in charge as head coach. The Wallabies next face the Barbarians in Sydney this coming weekend.

Australia finally did enough to get one over the All Blacks on Saturday, their first win against New Zealand since 2015. This win has been described as a job saver for head coach Michael Cheika, but is the 50-year-old leading Australia in the right direction or simply treading water?

When he took over following the shock departure of Ewen McKenzie in late 2014, Cheika lost his first three matches in Europe, but responded by winning the Wallabies’ only Rugby Championship title to date.

Of course, Cheika’s most impressive achievement was taking Australia to the 2015 Rugby World Cup final one year after taking over as head coach. But since then the Wallabies have won just 11 from 25 matches, a success rate of 44%.

His total win ratio for Australia is 54% and compared to his predecessors Ewen McKenzie on 50% and Robbie Deans and Eddie Jones both on 58%, he’s not doing badly.

Although Cheika has now been in charge for three years, it may be the first time his squad has finally begun to fit his model of play.

The first year was spent preparing for the World Cup which meant recalling veterans Matt Giteau and Drew Mitchell and during the 2015 Rugby Championship, he was forced to play two openside flankers – to mixed success in the back row.

In his second season he brought in nine fresh faces to his squad and was subsequently beaten 3-0 in the Test series against England on home soil, before losing the Bledisloe Cup two months later.

Cheika’s side then won 70% of their remaining games that season and have thus far repeated that success in 2017. Scotland fans will want to remind Cheika of their win in June this year, but aside from that they have only lost to New Zealand in the current season.

Australia legend Michael Lynagh described the Wallabies’ performance as ‘worse than the U14Bs’ after their 34-54 defeat to New Zealand in mid-august, but praised their progression after the result on Saturday.

Sean McMahon was one of the youngsters who impressed at the weekend; making more metres than any other forward on the pitch and Reece Hodge played a key role from the kicking tee, another one of Cheika’s more recent recruits.

On Saturday, the Wallabies nearly doubled the numbers of metres run by New Zealand through 80 minutes and made 56 extra passes. They nearly tripled the number of defenders beaten and had 56% possession.

Although it has taken the Wallabies eight attempts to beat the Kiwis since doing so in 2015, there were just four players from the All Blacks side who started in the third Test of the summer Lions series that played against Australia at the weekend.

This arguably takes away some credit considering Beauden Barrett was among the absentees, however Australia are still without the influence of David Pocock and Will Skelton and have lost other influential players to European leagues.

In terms of controversy off the pitch, the Australian seems to be keeping things under control.

Apart from appearing a bad loser at times, there have been few issues surrounding the players and whether or not this is down to Cheika, a happy squad is always a good sign.

Of course, 2019 is still a long way away, but their signs of building are evident and the Autumn international against England at Twickenham is suddenly far more significant after the Wallabies’ success against the All Blacks.

As for Cheika, a couple more wins are still needed to fully regain any lost confidence following a run of losses and draws this season, but Australia may benefit from having the same coach for the full four-year cycle.

His next test comes this weekend, as the Wallabies host the Barbarians in Sydney. He named his side earlier this week, and announced that Israel Folau will be taking a break after the game.