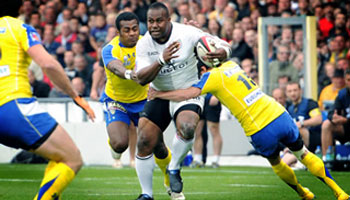 Recently we saw a clip of Rupeni Caucau making somewhat of a flip against Bourgoin, messing up a runaway try with a somersault that might have impressed, had he grounded the ball. This weekend he showed what he’s capable of though.

Stade Toulouse beat Clermont 15-6, ensuring that they finished the regular season in first place, and maintaining their unbeaten home record. Maxime Medard crossed first for the home side, thanks to a nice build up, broken tackle, and then offload by Caucau.

In the second half we got to see something that brought back a glimpse of the past, with the big man – playing on the wing again – scoring from a set piece as he beat at least two players on the way to the tryline.

At around 110kg’s, his low center of gravity and acceleration makes it difficult to stop him with his tail up. He appears to be enjoying his rugby again, building up nicely of late, having now been with Toulouse for three months.

“I feel like I have been here two or three years already,” he said.

“In Toulouse, everyone is smiling and ready to help if needed. The players are like brothers. We are a real family. I want to keep playing rugby and be at my best and I would prefer to do that in Toulouse.”

This weekend seemed to be his best performance in recent years, something the Fijian selectors will have taken note of, especially as they said not too long ago that he is still on the radar, regardless of his size. Trials for the Pacific Nations Cup will be held on June 3rd.