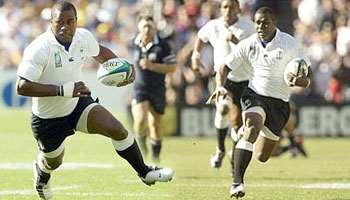 Give it to Caucau, and anything can happen. Scotland found that out the hard way in the World Cup in 2003. Two well finished Fijian tries by none other than ‘The Man’ himself; Rupeni Caucaunibica.

The first try was a bit controversial as there was a definite forward pass before he got the ball, but that aside, his acceleration and strength was incredible to see.

The second was in a totally different class to most individual efforts you’ll see. Getting the ball on his own 22, Caucau literally breezes past the Scottish defence with his immense speed and incredible low centre of gravity.

One of the biggest disappointments for me so far at the 2007 World Cup is that this great player is nowhere to be seen. He’s currently serving three month doping ban for testing positive for marijuana.

There is talk however of him technically being able to make an appearance in the later stages of the tournament, but I’m not sure how true that is or if it would ever happen unfortunately.