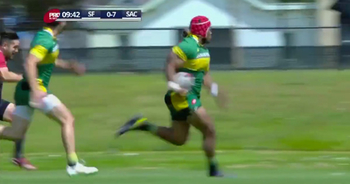 The inaugural season of Pro Rugby in the USA is in full effect, as the week 12 showdown between the Sacramento Express and the San Fransisco Rush produced this brilliant coast to coast try, with a former All Black being beaten in the corner.

The score sprung from a severely over-cooked San Fransisco line out throw from about five meters out. US Eagle Langilangi Haupeakui seized the moment and produced a nasty side step and serious pace to rumble for roughly sixty meters.

From the look of things, he could’ve gotten perhaps twenty more at least.

Support arrived and the Express were able to swing it the width of the field – with the help of an apparently accidental tip pass – to winger Cody Jerabek. Jerabek then beat former All Black Mils Muliaina to score in the corner.

Sacramento went on to win the match 43 – 19, with Haupeakui playing a huge part in the result.

Video: The Eben Etzebeth ruck clearout that has fired-up Twitter

There was no denying that Lyon were deserving winners in Friday night’s European Challenge Cup final, defeating Toulon 30-12 at Stade Velodrome, but the main talking point on social media in the aftermath was the 72nd-minute ruck clearout by Eben Etzebeth.