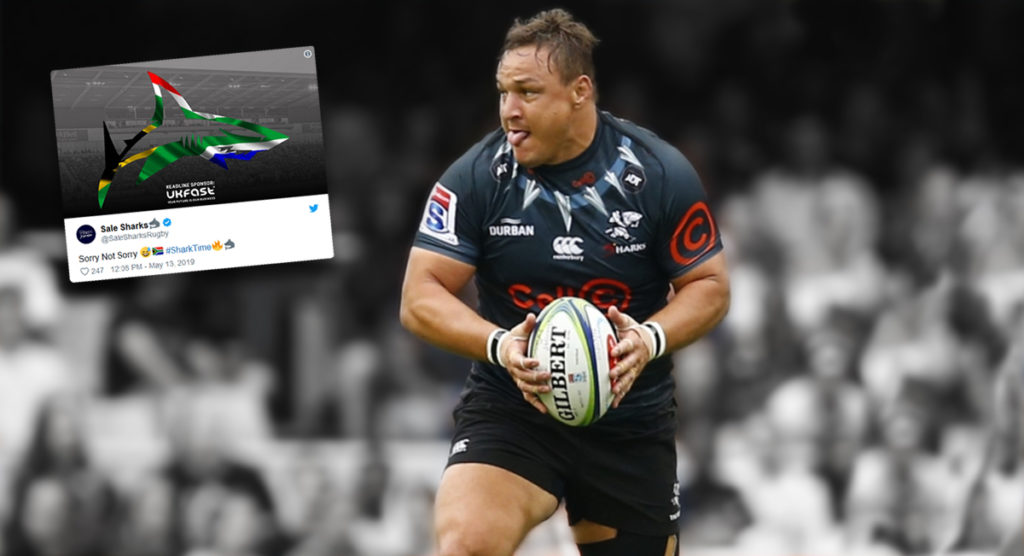 In recent weeks, a lot has been said about Sale Sharks’ recruitment ahead of next season. Steve Diamond’s team have made a number of signings for their next campaign with one thing in common, many have been South African.

The Sharks already have signed Akker van der Merwe, Lood de Jager and Rob du Preez – possibly with his brothers Jean-Luc and Dan – to add to the large contingent of South Africans already in the north west.

They added a further Springbok to their ranks today with the signing of Cell-C Sharks prop Coenie Oosthuizen. The 30-cap international will grace the Premiership with his power and size next season, and will join up with fellow South Africans Faf de Klerk, Jono Ross, Rohan Janse van Rensburg and Josh Strauss who are already at the club.

Add to that Byron McGuigan and there will be quite a few similar accents on the training paddock.

In light of this signing, a number of people on social media have been trolling Sale and their recruitment, calling them the “Saffa Sharks”, and saying that they may as well relocate to South Africa. But Sale have joined in on the joke, sharing a picture logo with the flag of South Africa.

Sale continued, as they later shared a new photo of the club’s kit ahead of next season, changing from their usual navy blue to a dark green and gold of the Springbok jersey.

While there may be a few comments regarding Sale’s signings, no one can fault their quality going into next season. They have simply taken advantage of South Africa loosening their rulings surrounding players playing abroad, not to mention the weak currency and out of control crime levels in the country.

While this means that there will be a huge exodus of South African players, Sale have been the quickest to act. Their best player currently is De Klerk, and if any of these signings can replicate the scrum-half’s impact, Sale could have a very successful season.

Diamond will not mind the jokes that are being made about his club if they produce what he wants on the pitch next season, but that has not stopped the club responding in the perfect way.

Funnily enough, their latest tweet on the matter, showing that their players are actually from all over the world, features two of the aforementioned South African born and bred Scotland players.

In all seriousness though…

We have Sharks from all over the world! 🌏

It’s your last chance to catch the boys in action on Saturday! 😳

How the big-name signings really went in Major League Rugby