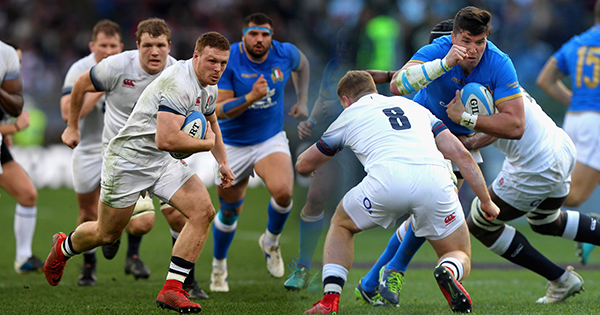 England claimed a convincing 46-15 win in Rome on Sunday. The defending Six Nations champions kicked into gear in the last quarter, giving the final scoreline a slightly different feel to the majority of the match, as Italy put up an admirable fight.

In total England scored seven tries, with winger Anthony Watson and number eight Sam Simmonds each picking up a brace, with Owen Farrell, George Ford and Jack Nowell also crossing for tries. Three of the tries came in the final fifteen minutes though, as Italy looked spent.

The result came with a bad casualty, however, as starting number nine Ben Youngs picked a suspected knee ligament injury, no doubt ruling him out of the rest of the championship.

Simmonds impressed on the day, showing his raw speed whenever he got the chance.

“He’s a bit of a freak Simmo, isn’t he? He is very quick,” said Jack Nowell, who plays with him at the Exeter Chiefs.

“He’s up there with probably the quickest I’ve played with. A lot of the boys here were saying as well how quick he is, but he’s got a big backside so that’s where the power comes from.”

Coach Eddie Jones was equally impressed (by the speed), despite previously thinking he was too small.

“Life’s full of contradictions and he’s one of them. He’s a great discovery for us. He’s got gas, he does all our speed work with the backs and is just a completely humble boy.”

England have a far more challenging prospect up next, however, as they face an in form Wales team, who had no problem taking care of the the threat of Scotland in Cardiff.