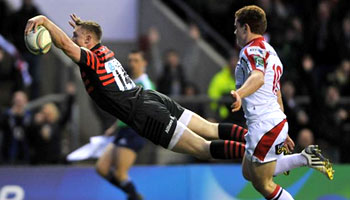 Chris Ashton scored one of his better tries in recent times as Saracens beat Ulster 27-16 to progress to the semi finals of the Heineken Cup for only the second time. They will return to Twickenham to face French heavyweights Toulon.

“We were outstanding and our forwards worked their nuts off against a very powerful team,” said Farrell post match. “We expected a hugely physical battle and that’s what we got.

“I wasn’t the only Saracens player knocked back on the seat of his shorts but we fought for each other. Overall, we are really proud as a squad. It was a real team effort,” he said.

Ashton’s 63rd minute try sealed the win for the home side, as he tracked an inside line in trademark style, then backed his pace despite England team mate Brad Barritt shouting on the inside.

On a sidenote, South African number eight Ernst Joubert took a nasty knock to the face during the match, despite finishing all smiles at the final whistle. BBC correspondent Dan Roan posted this quite shocking Tindall-esque photo of Joubert’s badly broken nose on Twitter.

Saracens will play their semi final on April 28th at Twickenham. Below is a look at Ashton’s try.