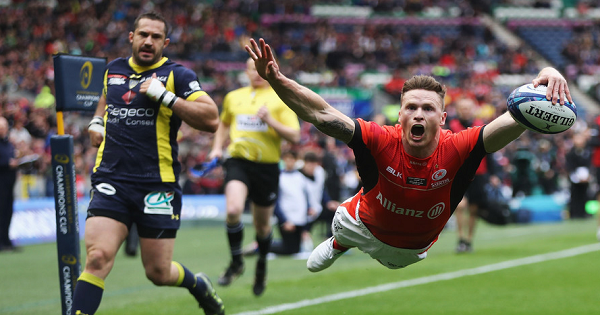 Saracens won the European Champions Cup for the second successive season after a hard-fought victory against ASM Clermont Auvergne at Murrayfield on Saturday.

Chris Ashton got the defending champions off to the perfect start with his record breaking try – his 37th in Champions Cup history – 12 minutes after a deft chip ahead from full-back Alex Goode. George Kruis then barged over for the second try against a stunned Clermont side.

The French side got themselves back into the match with a well taken try from Rémi Lamerat, the centre going over with the help of veteran Aurélien Rougerie.

Saracens eeked out a larger lead after the break thanks to an Owen Farrell penalty, before Nick Abendanon scored the pick of the tries.

Then seemingly out of nothing, Clermont showed the sort of counter-attacking rugby they have become synonymous with over the years. Slick handling between Damien Chouly, Camille Lopez and the final offload from Peceli Yato to Abdenanon was sublime rugby which not even Saracens could defend.

Saracens still held the lead and struck back as only a side like Saracens could. They dominated territory and strangled Clermont out of the game in the second half with Goode’s match-deciding try eight minutes from the end. Farrell’s superb touchline conversion put the icing on the cake for a team apparently unbeatable in Europe at the moment.

EPCR Player of the Tournament Owen Farrell was instrumental in securing another triumph for Sarries and left Murrayfield with the Anthony Foley Memorial Trophy as reward.

“To get to a final again is pretty special,” said Farrell to Sky Sports. “You have to build on everything that you’ve done last year, not just to do the same as before. To get here and put together a performance like that is pretty pleasing.

“A lot of us of us have come through together. I think that time together really counts for a lot. To show the composure when things weren’t quite going our way at times was pleasing.”

For Clermont, it was another heart-breaking final defeat. After losing to Toulon in 2013 and 2015, there would be no third time lucky in 2017. Scrum half Morgan Parra however, admitted Sarries were just the better team on the day.

Speaking to L’Equipe, Parra said: “It was frustrating to not have been able to control the game. Our quality has been keeping the ball in hand, to try things and express ourselves. By dominating the physical encounters, Saracens made it difficult for us.

“We were put off by the wind in the second half. And by the pressure Saracens put us under. When we scored on 52 minutes (Abendanon try) we knocked the ball on at the restart.

“We got another three points on 61 minutes (Parra penalty) but then we knocked the ball on five metres from our line. But the match wasn’t lost solely on these points,” Parra said.

Extended highlights are included below. View highlights from the Challenge Cup final here