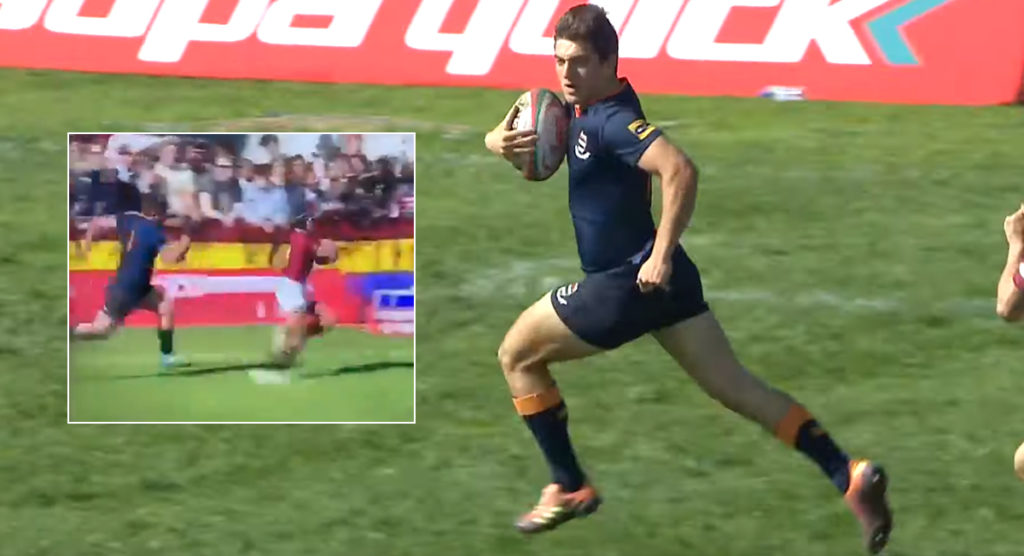 This try scored in South African schoolboy rugby on the weekend has got quite a bit of attention this week. It features two of the traditional rivals in the country as they went head to head in a thrilling derby match in Stellenbosch.

Hosted by Paul Roos – the school that has produced a number of Springboks, including latest scrumhalf sensation Herschel Jantjies – a packed crowd got to witness some excellent tries.

There was one clear moment of the match though, taking place late in the first half as Paul Roos broke down the left flank. Incredibly, the breakaway run that ended up in the hands of their left winger, was sensationally chased down, by a prop!

The crunching tackle caused a turnover, but that wasn’t the end of the action.

Grey College fullback Franco Knoetze then ran from his own tryline, straightened up and scythed through the defence, hitting sixth gear to go all the way untouched for a memorable try.

Unbelievable defence effort by Grade11 prop Tielman of @GreyKollege and then the ridiculously insane 90m counter attack by Knoetze full back pic.twitter.com/iPICiaGycL

The derby was won 51-28 by Grey College, thanks in part to the brilliant commitment from the likes of their courageous prop.

You can see more replays of the try below and full highlights lower down the page.

In their emphatic 51-28 victory over Paul Roos, Grey College fullback Franco Knoetze scored one of the more memorable tries in the Derby's history to get the entire crowd on their feet ⚡️👏🔥 pic.twitter.com/wLrtfl3cOZ