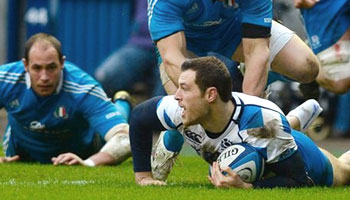 Scotland claimed a record 34-10 Six Nations win over Italy at Murrayfield on Saturday. It was their first win in the championship for two years, bringing Italy crashing back down to earth after their famous win over France just a week ago.

Just a few days back we were singing the praises of Italy, and Luciano Orquera in particular, but as the cliche goes, a week is a long time in rugby. Orquera didn’t play to the high standard he set in Rome and was yanked from the field directly after throwing an intercept pass to Stuart Hogg.

Hogg scored from it with an impressive sprint down field, adding to tries from Tim Visser, Matt Scott and Sean Lamont. Italy scored a consolation try through Alessandro Zanni, but Scotland achieved a runaway victory as they took their chances well, pleasing interim coach Scott Johnson.

“We are really happy with the win as we are now in this championship and want to win it,” said Johnson. “I liked the intent from our boys. We spoke about the contact area all week and straight from the start we were aggressive and turned over the ball.

“We had our chances and scored from them. There were areas we showed improvement but there were others where we let ourselves down as we should have put Italy out of the game. There was still plenty left out on the pitch. If we get our part right then we will start killing teams off earlier.

“If we had lost then we were out of the championship. We proved we can score points but sometimes the scoreboard disguised some of our ills,” he added.

Official highlights from the game are shown below. Unfortunately there is no commentary with it.