Scotland The Brave upset the Wallabies at Murrayfield 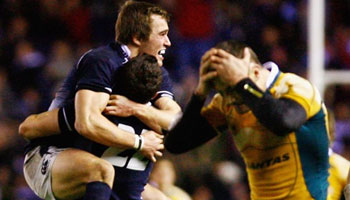 The Murrayfield faithful turned out to witness what has been described as Australia’s worst Test defeat in decades as Scotland beat them 9-8 on Saturday.

The Wallabies, ranked third in the world, lost to a ninth ranked Scottish team who picked up their first win over the Australians in 27 years.

With supposed saviour Robbie Deans in charge, the Wallabies have reached new lows according to their media, as theyve lost for the seventh time in Test rugby this season.

“It may be the worst Test loss by Australia since the 1973 crash to Tonga in Brisbane,” the Sunday Telegraph’s Jim Tucker said.

“Certainly, no Test played by the Wallabies since has been frittered away with such dominance of possession, territory and genuine chances.”

Greg Gowden of the Sunday Herald said: “The Wallabies had untold attacking opportunities to defeat a second-rate Scotland team who basically just defended and defended all night to win this game.

“This is one of the most inexplicable moments in Australian rugby history and without doubt their worst moment of the professional era, he added.

Scotland defended like trojans as they kept out a determined Aussie outfit who had the better share of the possession and had a chance to win it but for a missed kick by Matt Giteau at the death.

Scotland coach Andy Robinson was ecstatic with the win, praising his team, calling it the most courageous performance hes ever been involved in.

“The effort that has been put in, the way the team got off the floor and defended – and credit to Graham Steadman for the way he’s put this defence together – was incredible.

“The amount of ball that we gave Australia to play with throughout the game and the courage that the players had to get up and keep knocking them over.

“We needed a bit of luck, I thought the guys worked hard to establish that luck. If we can perform like that, with that same courage every time we go on the pitch, then we can grow a team and that’s what we’re about now.

“I’d like us to play with a little bit more ball and want to keep hold of it a little bit more,” joked Robinson. “But that’s the levels that we’ve got to improve and it just shows you we do have to improve with our ball in hand. That’s a platform now for us to be able to do that.”