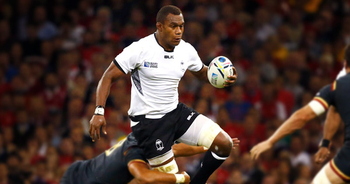 Fiji may not have pulled up as many trees as they would have liked during the recent Rugby World Cup, but their exciting off-the-cuff style of play would have been less so if it wasn’t for one man: second rower Leone Nakarawa.

Certain rugby circles earmarked Nakarawa as one to watch during the tournament, and he did not disappoint, with thousands more people getting to know the rangy lock and his extravagant style of play.

After the group stages the Glasgow Warrior, 27, led the tournament with turnovers won (9) and offloads (10), more than players such as World Player of the Year nominees David Pocock and Dan Carter. In four games he made 42 carries for 117 metres, and 34 tackles.

Nakarawa was the crucial player in Fiji’s counterattacking game that looked to make use of his superb offloading abilities. Only he and captain Akapusi Qera played every minute of his country’s campaign, and he received Man of the Match against Uruguay, a game in which he scored and was a key component in a number of other tries.

One person who should be thanked for helping Nakarawa’s game is Warriors coach Gregor Townsend. The former international brought the Fijian to Scotland, and has been one of the main people to round off the lock’s style of play and stop him playing so erratically, as well as giving him regular rugby.

It is hard to believe that Nakarawa was almost unknown before he arrived in Glasgow in 2013, and that he had signed for Saracens in 2011 but never played a game for them.

Here’s a look at some of his best moments from a tough World Cup for Fiji in Pool A.