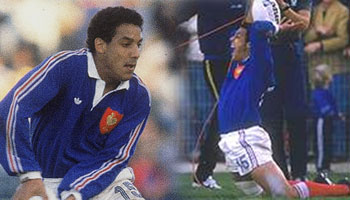 Serge Blanco was one of the best attacking fullbacks the worlds seen. He was famed for his flair on the field and epitimised the French attitude to rugby. He also famously smoked 60 cigarettes a day throughout his career.

Against the Wallabies in the semi final of the inaugral World Cup in 1987 he effectively knocked the Aussies out of the tournament with this late try in injury time.

The try that broke Australian hearts is to this day considered one of the most famous tries in French rugby history, as well as World Cup rugby history.

With the French kicking off this years World Cup against Argentina on friday, the world will be watching for the next superstar waiting in the wings to take the stage. Follow all the best incidents right here on rugbydump.com.