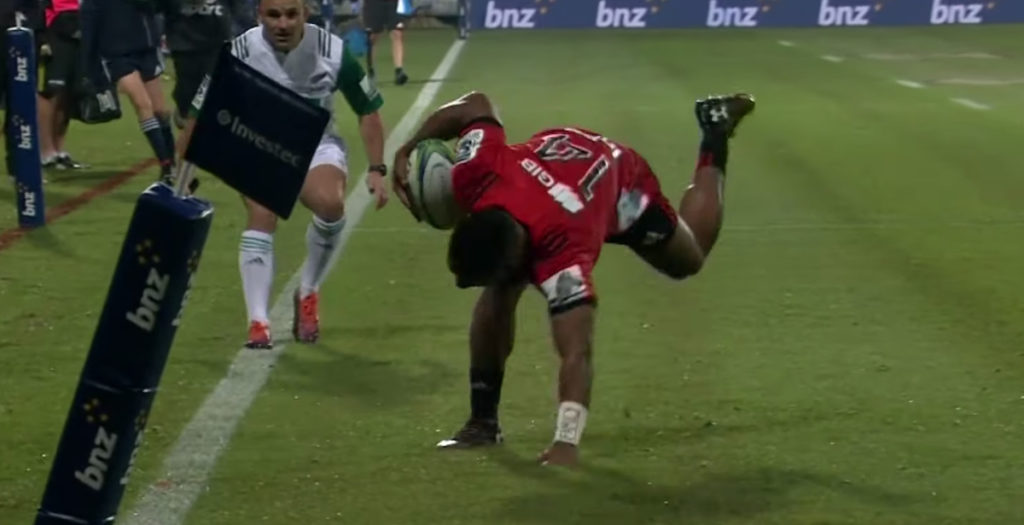 A Sevu Reece brace helped the Crusaders to a 30-26 win over the Hurricanes in Christchurch to reach their third consecutive Super Rugby final.

Crusaders centre Ryan Crotty set up Reece for his first try after just 13 minutes with a well-weighted cross field kick for the 22-year-old to produce this amazing pickup in the corner:

Just on the stroke of half time, Hurricanes centre Ngani Laumape powered over the try line to score the first five-pointer for the visitors, leaving the Crusaders with a 13-7 lead at the break.

The second half opened up in true Super Rugby fashion with five tries shared between both sides. First up was Ben Lam after just one minute, who benefitted from a wonderful offload from All Blacks scrum half TJ Perenara.

The Crusaders responded almost immediately with Reece stepping up once again to assist fly half Richie Mo’unga with a score under the posts, which he converted himself.

The Canes then snatched another try through Laumape once more, who skilfully chested the ball forward to set himself up for this fantastic solo score:

The try fest continued as Reece grabbed his second of the night after nearly an hour played, finishing off a lovely sequence of passes and offloads by the men in red.

All Blacks fly half Beauden Barrett shortly after converted a try scored by half back partner Perenara from the base of a ruck meaning the Crusaders’ lead was cut to just one point with less than 20 minutes to play.

However just one more penalty from Mo’unga was enough to see the Crusaders over the line to reach yet another Super Rugby final, which will be played against Jaguares next weekend.

Having scored two and set up one try on Saturday, Reece has to be one of the breakthrough players of 2019 with more tries than anyone else in the competition in just his first season with the Christchurch franchise.

The Fijian-born winger has also been in the spotlight recently as the All Blacks World Cup squad selection approaches and all of his season highlights can be found here.