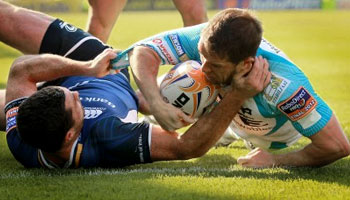 Shane Williams helped the Ospreys to a dramatic 31-30 win over European Champions Leinster in the RaboDirect PRO12 final in Dublin on Sunday. Williams scored twice, including a late try that was brilliantly converted by Dan Biggar.

Hanging up his boots at the age of 35, Williams has sensationally scored tries in all of his ‘farewell’ games. First it was against the Wallabies for Wales, then he did it a few weeks back in what was dubbed his farewell game, then yesterday he did it in his final game for the Ospreys.

Williams feels that after beating the Heineken Cup winners, Ospreys should now be regarded as one of the strongest sides in Europe. “We’ve shown that we can compete with the likes of Leinster.

“They are probably the best European side ever, really, up there with Toulouse and Munster. And we can come to the RDS and play a full-strength side and come away with a victory under pressure.

“That’s the sign of a good team. I am very proud of the fact that I am associated with the Ospreys.

“We have worked very hard this season, we have had our ups and downs and there has been a lot of change in the ranks, with a lot of players leaving the region. For us to stick at it the way we have this season, it’s a compliment to the guys.

“I’ll never forget this day. It’s up there with anything I’ve achieved in my career. To go out with a couple of tries in a final in your last game for the region means a huge amount.”

Williams will play one mroe game on Saturday, for the Barbarians, against none other than Wales.

Below are his two tries and the winning conversion. The rest of the highlights will be posted soon.