Sona Taumalolo makes thumping hit against Pau in the Top 14 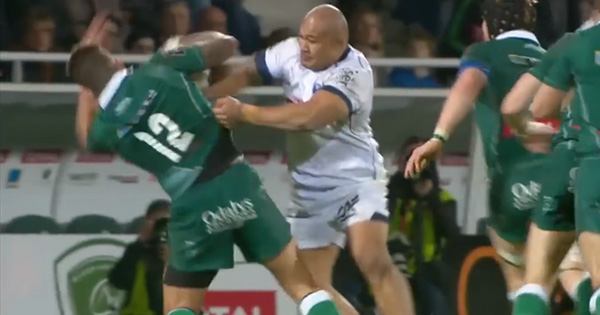 Tongan international Sona Taumalolo did what he does best this past weekend as he unloaded on Pau centre Jale Vatubua in a hit that sent the centre sprawling to the turf. The tackle took place during Pau’s defeat of Grenoble, their sixth consecutive win.

The popular former Chief has been rampaging in the Top 14 since leaving for French shores after the 2012 Super Rugby season.

Although this challenge was deemed legal, he recieved a yellow card later on in the match.

With hits like this, the Chiefs surely wouldn’t mind having his services again as they look to kick off thier Super Rugby season with a win this coming weekend against the Highlanders.

Sona’s Grenoble however had trouble with another Southern Hemisphere player, former All Black Colin Slade, as he tallied 24 points in total to help Pau to a 39-22 victory.