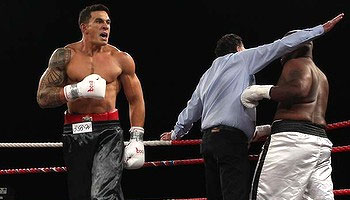 Sonny Bill Williams went five from five as he defeated American Clarence Tillman III in the first round of their New Zealand Professional Boxing Association championship bout in Hamilton.

The fight was stopped after Williams connected with a strong left before following up with a flurry of punches that left Tillman hanging on the ropes. SBW was ecstatic with the win.

“It’s massive. On the world stage it’s just a blip for me, coming where I have in a year-and-a-half it’s massive. People love me or hate me but I can’t dwell on the negatives, I’m very happy.”