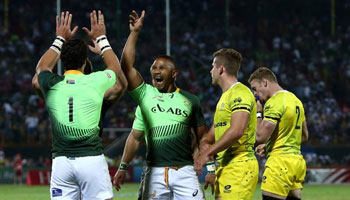 South Africa climbed to second spot on the overall HSBC World Rugby Sevens Series table after a powerful display in the knockout stages of the Dubai Sevens, where they beat both New Zealand (28-0) and Australia (33-7) on the way to the title.

Following a fourth place showing at the Gold Coast in October, they are now just two points behind Fiji, who lead the standings on 39 points ahead of the next round in Port Elizabeth, South Africa.

The Australian side beat Fiji in extra-time of a thrilling semi final, and despite having an early intercept chance in the final, they couldn’t keep up with South African’s intensity on defence and at the breakdown, and their lethal finishing out wide.

“We tried to play with variation and the guys really bought into the plan. The players deserve the credit for an outstanding display,” said coach Neil Powell.

“We are not the biggest team on the circuit, but we are very physical and don’t stand back for any team in the tackle. Our form at the breakdown area was very good and we really took our scoring opportunities well,” he added.

Pool Draw for next leg

The 16 teams now fly to South Africa for Round 3 in Port Elizabeth. The Pool draw was made earlier, so Dubai champions South Africa will face Wales, USA and Kenya in Pool A, while Argentina, Portugal and the non-core side Zimbabwe await Dubai runners-up Australia in Pool B.

Below are highlights from Day Two, featuring the knockout stages. View Day One highlights