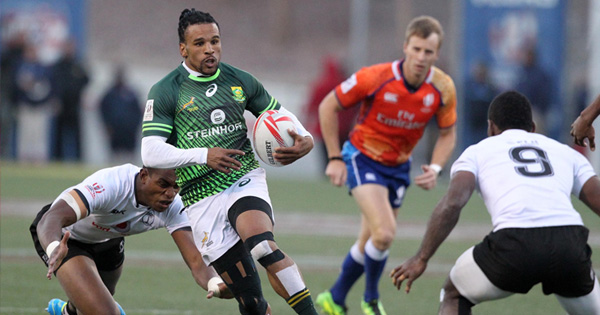 South Africa have won yet another tournament on the HSBC World Rugby Sevens Series, this time beating rivals Fiji in the final to claim the 2017 Las Vegas Sevens title. The 19-12 victory came after a hard-fought semi final against the host team, who came third overall.

The Blitzboks have now won four out of five legs of the HSBC Word Rugby Sevens Series and are streaks ahead on the overall series table. They have won the last 28 of 30 matches they’ve played.

“I am very happy. It was not our most clinical performance of the season at all, but we got the result and that is what was important. I would rather win ugly than lose pretty,” admitted coach Neil Powell.

“The guys showed tremendous fighting spirit and always managed to come back and score the tries we needed to win the matches. They kept their focus and played very well in the second half of the matches, never giving up.”

“I thought Siviwe Soyizwapi and Dylan Sage did very well in taking over the roles of those two stalwarts. We are pretty blessed with our depth in the squad.

“We are in a good position, but we need to maintain our form and cannot think that things will just happen for us from now on. We need to stay grounded and start afresh, as we will need to do in Vancouver next weekend.”

The next round of the series takes place in Vancouver next weekend. The draw has been made and South Africa will face England, Kenya and Chile in Pool A.

Official highlights from the knockout rounds below, and you can watch the full Final on page two