Springboks and Wallabies thriller ends in another disappointing draw 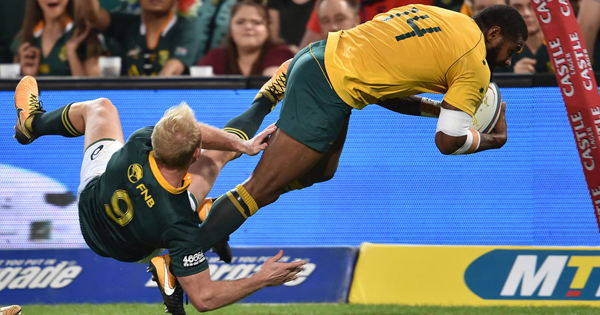 For the second time in this year’s Rugby Championship, South Africa and Australia could not be separated as they played out an entertaining 27-27 draw on Saturday. The lead changed hands four times in the second half, as both teams treated Bloemfontein to some expansive rugby.

Both sides scored three converted tries and had their number tens kick two penalties, but after the two sides drew 23-23 a few weeks back, it was the same outcome again, despite a late chance for the hosts.

Springbok flyhalf Elton Jantjies had a long range opportunity to snatch the win with two minutes left in the game, but while still recovering from a bad knock to the head, his kick went wide and it ended in a stalemate.

“We created opportunities and that was the pleasing thing,” said Bok coach Alister Coetzee.

“The fact that we did not convert all of those, was not. This was a fantastic test match, with the physicality right up there and the skill set on display was very good and we were part of that. There were foundations laid and lessons learned tonight that will take this team forward.

“We do create opportunities; players must never be scared to take chances. We feel that we were the better team out there tonight.”

The game was fairly even stats wise overall, however, the Springboks had the majority of possession (59%) and forced Australia to make 120 tackles to their 82. The visitors struck when it counted though, and scored some well taken tries, the first to Israel Folau in particular.

Winger Marika Koroibete scored twice, while the home side’s Ruan Dreyer, Jan Serfontein and Courtnall Skosan all crossed for what resulted in seven-pointers.

The Wallabies now head to Argentina to take on Los Pumas in Mendoza, while the Springboks stay at home to face the challenge of New Zealand in Cape Town next weekend.