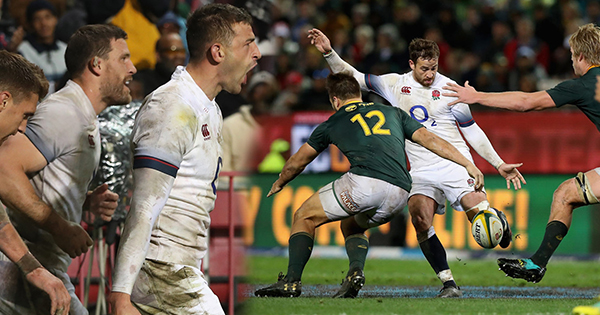 England coach Eddie Jones is satisfied with their latest showing, beating South Africa 25-10 in Cape Town to pull back a win and avoid a 3-0 whitewash. He was also full of praise for Jonny May, who had another storming match.

Trailing 2-0 in the three-Test series, England performed far better in the wet conditions than the hosts, winning up front and on the penalty count. Captain Owen Farrell was sublime off the tee, kicking a perfect seven from seven, including a conversion of May’s excellent try.

The try in question came from a pin-point Danny Cipriani kick, showing that ten years after last starting for England, he still has the kind of touches that made him a fan-favourite.

It was England’s first Test victory in South Africa in 18 years, so they despite losing the series, they take a big psychological boost from the win, ahead of their next meeting at Twickenham in November.

Coach Eddie Jones was so pumped up that he said, in jest, that he would like to arrange another Test between the two sides for next weekend

“It’s never a dead rubber. Every Test match is important and England have never won in Newlands before so we’ve created a record, and these guys are always going to be remembered in history so it’s a great thing for them.”

Jones was impressed with Jonny May, who scored for the fifth Test in a row.

“I thought May was outstanding and all series he’s been the class winger. His kick return, his chasing of kicks, his work off the ball have all been outstanding.

“Tom Curry with his third Test in a row, he’s becoming a really good player,” he added, praising the 20-year-old flanker who was a prominent figure at the breakdown.

Cipriani deflected praise and gave all the credit for that try to flyer May.

“It’s all about instinct and luckily there is one winger in the world who would have scored that and that was Jonny. As he’s shown throughout this series he’s absolutely rapid so you know how much you can push the boundaries with him.”

“We were terrible today, in my opinion,” said coach Rassie Erasmus.

“We did learn a lot today, we knew we took a gamble and we looked at combinations but the things we got wrong had nothing to do with combinations, they were things that we could control such as discipline and breakdown play.

“Sad to say, we didn’t get up for this game. I will have to look at myself and how we prepared – maybe I made mistakes but we’ll have to analyse how the different players reacted to playing a different game in a different competition.”

Erasmus added that in the bigger picture, there is still plenty to be happy about.

“I really think we can win the World Cup. If we can get it right quickly then we are definitely in with a chance – but we have to manage our talent.

“There’s a lot of things we have to balance so that we have fresh, experienced team with a lot of talent when we go to the World Cup.”

The Springboks next face Argentina in Durban in the Rugby Championship on 19 August.