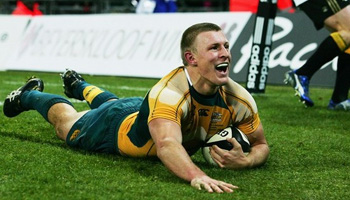 Last night Wembley saw a ferocious encounter between a star studded Barbarians outfit and the touring Wallabies. The game was packed with bruising hits, as both sides treated this more like a test match than an end of season rugby exhibition.

Jerry Collins and Schalk Burger of the Baa Baas were particularly committed to the cause as they threw their bodies around the field with very little self regard.

Despite the intimidating number of big names they were up against, Australia got off to a early lead of 13-0, thanks to taking some kicks at goal, even with the crowd booing them.

As much as the Barbarians threw at them though, the Wallabies soaked up, eventually forcing the scratch side to kick for poles themselves.

At 13-6 at halftime, the game was looking like it could go either way, and after the Barbarians were twice denied tries by the video referee, it took a try set up by Shane Williams and scored by Jerry Collins to bring the scores closer.

Young flyhalf Francois Steyn had a match hed rather forget, missing wayward drop goals and vital kicks for goal as his side had a real chance of taking the lead.

In the end it was the Wallabies though who soaked up all the Baa Baas pressure with some incredible defence, eventually turning over a ball and scoring through replacement winger Lachie Turner two minutes from fulltime.

Their first try came from an excellent piece of skill from Ryan Cross, setting up the run in for Lote Tuqiri.

An entertaining game all in all, errors cost the Barbarians the win, but it was sweet success for a Wallaby side that featured a few second stringers who got a deserved chance to shine after a long tour.