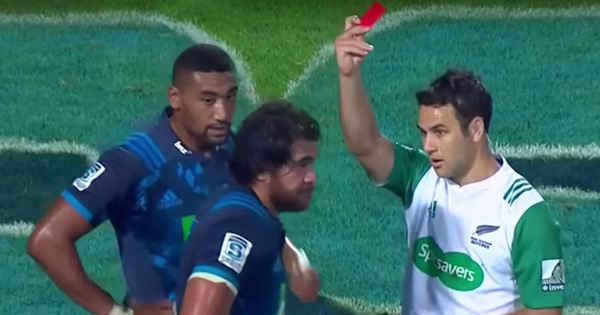 Following Friday’s red card for Steven Luatua against the Chiefs, the Blues loose forward has been banned for four weeks. Luatua pleaded guilty to contravening Law 10.4(e) Dangerous tackling of an Opponent, after his dangerous challenge on Tim Nanai-Williams.

The SANZAAR Foul Play Review Committee has accepted a guilty plea from the All Black and he has been suspended from all forms of the game up to and including Saturday 1 April 2017.

“Having conducted a detailed review of all the available evidence, including all camera angles and additional evidence, including from the Player and submissions from his legal representative, Aaron Lloyd, the Foul Play Review Committee upheld the red-carding of the Player under Law 10.4(e) Dangerous tackling of an Opponent”

“The player is therefore suspended for 4 weeks, up to and including Saturday 1 April 2017.”