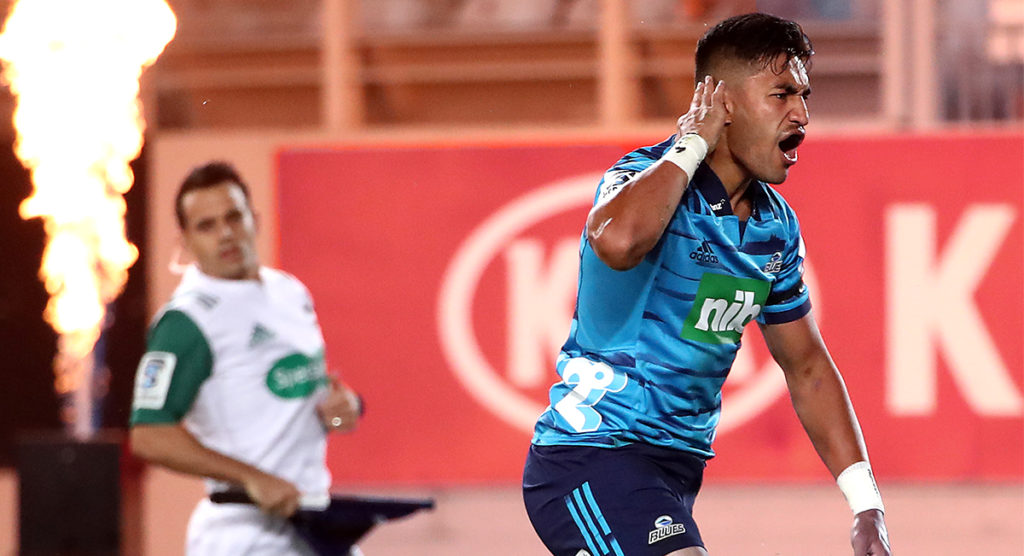 The Blues ended their 20-match winless streak against New Zealand opposition with an impressive 33-26 victory over the Highlanders at Eden Park on Friday. The game had some great moments, as well as moments that some players will want to forget, but Reiko Ioane’s brace was worth remembering.

The 22-year-old was fresh from a quartet of tries against the Sunwolves and it did not take long against the Highlanders, as he was on the scoreboard in the first ten minutes, with a scorching line from a lineout.

The prolific All Blacks winger had notched up his second just after the half hour mark to put the Blues in the lead going into half time. This time, Ioane was on the end of a brilliant break from fullback Melani Nanai and link up with TJ Faiane.

With six tries in two games, it is no wonder that fans are excited about Ioane’s form currently. The winger is not simply finishing tries in the corner, he is proving to be an unstoppable ball carrier at times with unmatched pace and movement.

The fact that he was directly up against an All Blacks competitor in Waisake Naholo means he will surely remain one of Steve Hansen’s starters. This is what the fans are saying:

Rieko Ioane how good are you

#BLUvHIG That’s an unbelievable try. All Four tries two weeks ago, now the first of of this game by Reiko Ioane.

Elsewhere on the field, Ioane’s back three partner Nanai also looked extremely impressive. Not only did he create Ioane’s second, but he went over for his own try in the second half.

The 25-year-old is joining Worcester next season, which is increasingly looking like an excellent acquisition and one the Warriors fans can get very excited about.

It was a long time coming for the Blues to snap their losing streak against their domestic rivals, but they did it in style.

How will you watch the next Rugby World Cup – Enter for a chance to win £100
www.surveymonkey.co.uk/r/WH2MFM3